Did you ever notice a circular device attached to the ceiling? It is a smoke detector, which some of you may already know. What happens if it starts beeping or chirping? The sound is annoying if it does not stop.

A quick troubleshooting step includes resetting the alarm via the reset button. You need to hold it for 15 to 20 seconds before releasing it. Wait for a few minutes and listen if it chirps again.

The importance of a working smoke detector

Battery-operated ones may give out an irritating squeak if you need to change their batteries. Aside from that, you will not even notice your fire alarm. Despite being unnoticeable, it is an important part of your home’s fire safety system because they sound when something is wrong.

You can find it everywhere, from houses, buildings, and even cafes, but we seldom give it attention. The first thing to know is to find out how it works.

How does it work?

An alarm has three things worth considering. These are the three types available in the market.

The ionization detector is common in small and domestic areas. Inside it, you will find the ionization chamber. It detects changes in the ionization process if smoke interrupts it. An alarm sets out when this happens.

This type is cheap and simple. You can find it in several hardware or fire safety stores around the country. However, an important precaution with it is its sensitivity. Dust or kitchen particulates can set it off, so be careful. The ionization type is an acceptable first-line defense in fire safety.

We recommend getting a different type, such as the heat and photoelectric detector. We will discuss these in detail below.

A heat detector is not sensitive to particulates, unlike ionization. Therefore, you will likely experience false alarms with this one. We use heat alarms in areas where smoke is prone, such as the kitchen or the grilling station. These areas typically smoke, but this does not indicate a fire.

The way how it works is it detects an unusual change in temperature. However, it limits the unit to work in a smaller area. We think ionization and heat alarms together will prove a more effective fire alarm system.

The photoelectric type goes off if smoke interferes with the light beam inside the detector. One of the advantages of the photoelectric is likely detecting a piece of burning furniture than burnt toast. The disadvantage is its expensive price tag, making it less popular in some applications.

Some alarms will have two or all three in a single unit. When picking one for you, we recommend checking the product specifications first rather than relying on others. Regardless, choosing the correct equipment for every application is important to ensure appropriate and consistent precautions.

A few things to know about your fire detector

These five things are worth knowing.

Research and statistics prove these fire alarms reduce the danger from happening or getting severe. It detects the early signs and proves it minimizes the likelihood of fatalities and harm.

Regular maintenance of your units will help them be in their top shape. Here are some maintenance tips for you.

Test your units once monthly to ensure the batteries are functioning. Hold down the test button until you hear a tone. You can use a long pole or a broom handle if the unit is in a place hard to reach. Some units may require you to press the button again to stop the alarm.

Clean or vacuum them

We recommend vacuuming them at least once bi-annually to remove cobwebs and buildups. Use a soft brush attachment to sweep around each vent.

Using insecticide sprays will prevent insects from infesting and nesting the insides of an alarm. However, be careful not to spray the sensors.

Battery replacement needs to happen once annually. Low-battery units will emit a beeping sound in fixed short intervals. However, not all have replaceable batteries. We suggest checking with the manufacturer before purchasing.

What are hard-wired smoke detectors?

The invention of hard-wired smoke detectors is to go around battery replacement requirements. Almost everything we covered in the previous sections focuses on the battery-operated type. Let us focus on the hard-wired type one!

A hard-wired smoke alarm system interconnects with the 120-volt circuit in the building. It connects directly to the electrical system, so it does not rely on a battery. A trigger to one alarm triggers all the units in the system. As a result, it is an excellent setup for multi-level homes, commercial structures, and apartment buildings. The interconnection you will find with it adds an extra layer of safety and security, especially to smaller homes.

Benefits of a hard-wired detector

The several types to choose from make it hard to choose one. The following are the benefits of a hard-wired, setting it apart from other alarm systems.

They are more dependable than other types. Although their primary power source is your home’s electrical system, they also feature a backup battery in case of blackouts or fire. A study from the United States Consumer Product Safety Commission concludes these detectors will still operate reliably even in fire.

If one unit in the system triggers an alarm, all others will also sound. So if the fire starts in the basement and you are on the second floor, you will still hear the alarm ring. An early warning like this can save lives.

If it’s time to switch out your alarm, here’s the one we recommend. 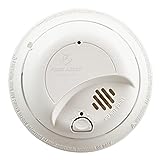 How to install or take it apart?

Knowing the installation and uninstallation basics is good. Before starting, homeowners need to know about electrical systems and circuits before attempting to do any installation process. If you do not know, we suggest leaving it to an electrician.

The electrical code does not state it needs to connect with a dedicated circuit. However, nothing is wrong with making a new line dedicated to your alarm system. Most electricians splice through an outlet or general lighting circuits to attach the detectors. One of the requirements is at least a 15-amp or 20-amp circuit and a 14-gauge and 12-gauge wire, respectively. Several brands manufacture and sell these detectors, such as Kidde.

Here is a step-by-step guide to the installation process.

Find and mark the locations.

Look for the best places to install these units. The ceiling is the number one choice because smoke tends to rise. If you decide to install it on a wall, it should not exceed 12 inches from the ceiling. The building code and manufacturer’s instructions manual will have the appropriate recommendations for where to install it.

Locate the wall studs and ceiling joists using a stud finder. Use the electrical box’s face as a perimeter to draw a template.

Cut through the drywall using a drywall saw. We will use the cut to hold the box that houses the detector. Thicker walls may need a hole as a starting point for the saw.

Run an NM cable to the box

Running a cable through the wall is the most difficult step of the process. It takes patience and ingenuity to figure out the best way to route it. Some electricians prefer routing the cables through an attic, then down to the detector boxes. Following this method will cost more wires, but it is the easier option.

Leave extra lengths as you route the cable. You can cut it according to your desired length at the end of this process.

Run it through other boxes

Run the cable from the first box to every subsequent box. The extra wire allows the smoke detectors to communicate with one another, so they will trigger a sound if at least one detects fire or smoke. Do not forget to leave excess cable lengths.

Insert the cable through the electrical box

Remember the excess cable lengths from the previous steps? It is time to cut those! You only need at least eight inches extending to each box.

Strip the outer sheath using a cable stripper, and insert it into the electrical box. About 1/2 inch of the insulation should extend beyond the clamps.

Clamping the cable into the box will vary. We suggest checking the manufacturer’s information sheet to know more. Metal boxes may require installing a clamp, while others already have an internal clamp.

The next step is mounting the box after securing the cables inside it. Tighten the screw to secure the cable box into place.

Position and install the mounting plates

Your smoke detector will likely come with a mounting plate, which you need to screw through the drywall. Route the circuit wires into the mounting plate. Use the screws that come with the set to secure it into place.

Connect the nuts and other wire connectors in the first box.

After establishing all these connections, tuck all the wires.

Why is my hard-wired smoke detector beeping?

It beeps for a few reasons. These hard-wired detectors have a battery as backup power in case of energy interruptions. The alarm will send short beeps if the battery is almost dead. The only solution to it is replacing the battery.

Check dust instead of the detector if the battery is not the problem. Dirt or debris may gather inside the chamber, causing it to chirp. The solution is to clean it.

If you still hear the chirping sound, you may already have a malfunctioning or dying unit. The only solution is to replace it with a brand new unit.

A green light on the smoke detector

A flashing green light is part of the power upcycle. In cases of brownout, outage, surge, or any similar issue, the detector goes through a power upcycle.

The device’s LED light will flash and stop every five minutes. If the issue stops, the light will stop blinking and turn into a steady green light. Therefore, a constant green light indicates the unit has enough power and is working correctly.

The smoke detector beeps twice and then stops.

Two beeps and a pause indicate a low battery. You need to get a replacement as soon as possible. If the issue is not the batteries, the unit is malfunctioning. You may need to contact an electrician for a replacement unit.

How do you stop a hard-wired smoke detector from beeping?

You can use the hush button in the smoke detector to stop it from beeping.

The following are frequently asked questions for smoke detectors that keep beeping.

Do smoke detectors beep when they expire?

Yes, you can unplug it. However, the procedure of doing it may differ. We advise you to check the manufacturer’s manual.

Where is the reset button on a hard-wired smoke detector?

It could be different from one manufacturer to another. In most cases, remove the smoke alarm from its bracket and disconnect it from power. Some also have a reset button somewhere inside the casing.

What do three beeps on a First Alert smoke detector mean?

A three-beep on a first alarm smoke detector means it detects smoke. It is likely a sign of fire, which needs serious action as soon as possible.

Can you unplug a hard-wired smoke detector?

Yes, you can unplug a hard-wired smoke detector. However, unplugging may involve unscrewing and detaching from the mounting bracket.