Do you hear some banging noises in your pipes every time you close a valve? It could be a sign of a serious phenomenon known as a water hammer. Protect your pipes from this catastrophe by informing yourself of all the causes and prevention methods below. Here are 6 causes of water hammer in pipes, washing machines, and toilets, and their best solutions.

What is a water hammer?

A water hammer is a phenomenon that causes the utmost stress on your piping system. It occurs when flowing water is suddenly stopped and forced to move in the opposite direction due to closing a valve. It is why it’s more likely to occur in a valve-operated piping system. A major sign of this phenomenon is its noise in banging form.

When it happens, the pressure is raised five to ten times more than the usual capacity of the water system. It causes extreme stress on the pipes and can even cause bursting.

If you’ve ever heard a jackhammer, that’s almost what it sounds like. Suppose you’re turning off your shower or any tap and hearing loud hammering noises. That’s it. The hammering noises are like loud bangs that are impossible to miss. It is a major sign that the pipes need extra maintenance to avoid a disaster.

What causes a water hammer?

Here are some probable causes of this event:

Shockwaves through the pipes are what cause this. Especially if you’ve got a high-pressure system, you can expect air to accumulate fast since it travels more speedily than water. Air pockets can cause banging noises and water sputtering when you open the tap, shower, or sprinkler.

2. Abrupt opening and closing of valves

Since fill valves in toilets and showers close suddenly when the intake is complete, it causes pressure to be created and thus makes the pipes shudder. It is more severe in fast-acting solenoid valves that close faster than standard valves. Fast-acting pressure will accumulate and create loud noises and burst pipes if not handled in time.

Some specific fittings can cause damage more quickly than others. It is the case with mixer taps, for instance. Install taps with soft-close valves that do not create stress in the pipes. Also, take care to install fill valves in toilet tanks that have appropriate valves.

Does your home have pipelines from the ’80s? If everything in there is creaking and croaking like a grandma, the pipes are likely too. Pipes can rust, burst or break over time with pressure. Before the 60s, houses were made with iron pipes that were covered with a layer of zinc. Zinc erodes over time and causes rusting as well as breakage. That’s why Pressure problems like a hammer are common with old houses.

It can be tempting to have great water pressure in the shower. It’s a feature that sells houses faster. But too much pressure can lead to pipes breaking, pumps failing, and damages worth thousands of dollars. Check and maintain adequate pressure in the pipelines, especially if you notice thumping sounds.

There are plenty of repairs that a home goes through, especially in plumbing. If somebody has done a bad job with valves and fittings, it can reflect in the form of these ferocious noises. If you’ve had work done recently and suspect it might have made things worse, call a professional to help you out.

Your toilet fill valve has the job of refilling the tank every time it’s flushed. But it has to close sometime. When it suddenly cuts off the water supply after the tank is full, the water is forced to move in the opposite direction. It creates a surge of pressure. It causes a loud banging noise in your pipes.

Although it may seem like something that can be ignored and haunts you the whole day, it can cause problems in your pipes and your toilet.

It can also be caused if your fill valve doesn’t close completely. Either way, installing a water hammer arrester is the best way to prevent burst pipes. We show you how to do this a little below.

Water hammer when the sprinkler system turns on

Sprinkler systems are trickier than other pipe fittings. Air is already less dense than water and travels at a higher speed. In sprinkler systems, the water is likely to stop and go more frequently than in other fittings abruptly.

Once this happens, hammering is likely to occur in the pipes. One of the ways you can do this is by letting the air bleed out first. Open up the furthest head on the line first to let the air out. Trapping air is prevented, and thus the likelihood of pressure surge is avoided.

Over time, this phenomenon will likely result in big damages if not taken care of. The damage can be done overnight or over a longer period which goes unnoticed at first until it’s harmed.

Here are some things you can watch out for:

The pressure surge of five to ten times is unprecedented in a system. Instead of having a full-blown bursting pipe, it’s likely that you can experience leakages from valves and joints. Smaller leaks will go unnoticed until they turn big. Check for wetness around the pipes, the back of the toilet tank, and other joints.

Leaks are visible damage, but sometimes the damage is done on the inside where it’s unknown to you. Pumps, valves, welded joints, and fittings can be permanently damaged with the pressure burst from water hammers. For instance, the pump inside the toilet tank can be affected and thus prevent flushing in the toilet and causing a lot of discomfort for family members and guests.

Pipes bursting are one of the most likely occurrences in this scenario. Not only is it scary, but also very difficult and expensive to repair. It can lead to the failure of other connected systems as well. Replacement of one pipe will lead to the replacement of the nearby fittings since they would have been affected too. Until the work is done, you and your family won’t be allowed to use the water supply line. It is a major inconvenience.

Failing of other appliances

When a pipe bursts or leakage occurs, the damage can be more than just to fittings. It can extend over to other appliances sitting nearby. For instance, water hammers in the dryer and washer’s fittings can damage your laundry appliances. A pipe bursts near light fittings or open sockets, and you could even have an electrical fire on your hands.

Here is a simple way to get rid of the water hammer.

How to fix and get rid of a water hammer

There is a simpler way to keep the pipes under check. You can simply install a water arrestor. Arrestors are small cylinders filled with air that cushion the effect of a quick shut-off valve. They prevent the banging and stress of pipes.

Here are some of the best ones and easy to install.

In this Amazon’s choice for arrestors, you’ll find all you need for the perfect fix to pipe problems. It’s so easy to install. It’s rated 4.9 stars for this criteria! Not just this, reviews suggest it’s super value for money. A stainless steel body that won’t be rusting or corroding and is fully reliable.

1,615 Reviews
Sioux Chief
It has helped thousands of homeowners.
Check the price on Amazon.

Your regular arrestor won’t do for your washing machine fitting. Here is the perfect solution to keep your washer and dryer safe from the stress of pipe issues. It’s got a lead-free brass body that is safe and non-toxic. Lead was used in pipelines until it was discovered to be toxic and harmful to humans and animals.

The chamber is stainless steel, so it won’t disappoint you as your pipeline has. 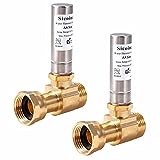 172 Reviews
Washing Machine Solution
Use it on your washing machine.
Check the price on Amazon.

It is an arrestor that can easily be installed in any position and any place in your home. It’s compatible with your:

The stainless steel body efficiently absorbs all vibrations, so your system doesn’t have to take the burden. 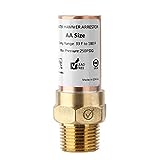 473 Reviews
Solimeta
It's sold by a reputable manufacturer.
Check the price on Amazon.

Where to install a water hammer arrestor

You want to install an arrestor where the pressure is likely to occur. It includes places like near the pump or the check valve. The pipe is changing direction in ideal places, like at the top of the pump riser. As a rule of thumb, you can install it at the end of the branch line next to the last two fixtures it leads to.

You can follow some tips to avoid this problem altogether and save yourself expensive repairs. Here they are:

There’s a water hammer with hot water only.

The rising steam causes more problems with hot water than in regular water. The pressure rises and so does the hammer frequency. But worry not! All you need to do is close the main valve and open up the faucet that’s giving you trouble. Once it is fully drained, all air pockets of steam have been released.

Now open up the main valve and enjoy!

Here are some common questions about hammers.

Where are water hammer arrestors required?

These are devices to ease the effect of pressure in the pipes and prevent hammers. If you notice banging noises, like a hammer going through a wall, it’s probably the need for an arrestor speaking. Other signs include leakage through joints, burst pipes, and toilet clunking too much on flushing. If your LG washing machine is also banging a lot during its run, that could be a hammer problem.

How do water hammer arrestors work?

These are air-filled cylinders installed at bends and near joints of pipelines. Every time there is a surge of water pressure, some water runs up these chambers. The air cushions the effect of the pressure. Thus your pipes are saved from bursting open. They can be attached to washing machines, toilets, showers, bathtub fittings, and more.

Do water hammer arrestors wear out?

10000 cycles are the usual number after which these devices need replacement. You can check the arrestor using a pressure gauge. Attach it to the pipe fitting and check the pressure. The usual number to aim for is 75PSI. If the number is more than that, the arrestor probably needs replacing.

How many water hammer arrestors do I need?

You’ll need one arrestor for every twenty feet of pipelines with multiple fixtures. You will need another arrestor for anything more than 20 feet on a multi-fixture line. Overall the fixture units decide how many arrestors are needed since that means more opening and closing and more stress.