Does the thought of using an oxy-acetylene cutting torch intimidate you? We feel you. After all, dealing with two tanks at risk of catching fire as you work sounds risky. You would rather have all your body parts firmly attached as you work, right?

Don’t let this safety risk stop you from using a cutting torch. The worst-case scenario you are thinking of doesn’t happen that often. If you have the right settings for the entire system, you can safely use an oxy-acetylene torch for all your projects.

But it doesn’t stop there. You also need to properly set it up before starting with this device, the same way you’d set up an engine-driven welder the right way.

Not only that, you must light it and shut it off correctly. Yes, there are proper ways to do all that.

Don’t worry because we will show you that all these are not as hard as you think. By the end of this article, you’ll know how to use an oxy-acetylene torch. You’ll even be able to light it the right way! Make sure you get the right tools!

If you’re getting started cutting metal, you must get the piece of equipment that will work for your needs. We carefully reviewed a bunch of products, and these are our recommendations. 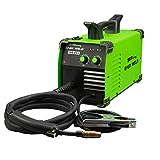 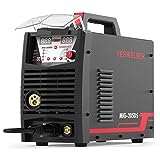 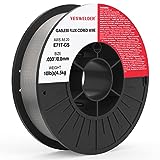 What we like
Great value, wire feed control & accessories included
Our rating
5/5
Customer review
"Welding 1/2” to 3/16” was a breeze!!"
Check the price on Amazon.
Best luxury option
Company
YESWELDER
Photo

What we like
Impressive, cheap machine
Our rating
4.5/5
Customer review
"Definitely worth what I paid"
Check the price on Amazon.
Best wire
Company
YESWELDER
Photo

What we like
Great gasless MIG wire at an unbeatable price as well.
Our rating
5/5
Customer review
"Very, Very Impressed"
Check the price on Amazon.

How Does The Tool Work?

Before setting it up, you must first understand how it works to handle it properly. Not only that, this will allow you to get a cut of good quality. It is only possible if done correctly. For more serious jobs, we recommend using a plasma cutter.

This device allows oxygen to mix with acetylene to combust and produce a flame with a temperature exceeding 3000 C. This kind of flame is the only one hot enough to cut through mild steel, specifically any steel that only has a maximum of 0.3% carbon.

Steel has an ignition temperature ranging from 700 to 900 ℃. It is enough to remove components that protect it against oxygen while keeping it in solid form. It pre-heats steel for it to reach that temperature; a cherry red color on the steel will signify that it has been adequately preheated.

When it reaches the unprotected steel, an exothermic reaction occurs that causes it to form oxidized liquid steel or slag. Because steel has a higher melting point, this formed slag can easily be blown away by oxygen. This then reveals the solid steel that has not been oxidized.

The exothermic reaction is continuous as long as the tool is lit up and the flame hits the steel. This constant reaction prevents a crust from forming on the steel. It immediately occurs if the protection against oxygen is still present. Because no crust forms, the oxygen can now penetrate the exposed solid steel and cut through it.

Due to the gas present, the flame produced is the highest among all oxyfuel cutting processes. This means you can work much faster and of better quality than the other methods

How Do You Set Up and Use An Oxy Acetylene Cutting Torch?

Large gas cylinders & gas tanks. Hoses. Regulators. Valves. Torch. Setting up an oxy-acetylene torch can be an overwhelming experience with all these components. While we admit that setting it up is not a straightforward affair, it is still possible for beginners to do.

After setting it up, you still need to do some checks before attempting to light it. Make sure that the regulators are facing away from you when you do the following:

How to use an oxy-acetylene cutting torch

How to Light It to Get Start

Because of the gases involved, lighting up a cutting torch is done differently. Unlike other devices, it will not produce a flame with just a button push.

If there’s one torch we feel makes life easier, it’s this one. 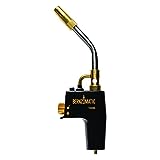 3,784 Reviews
Bernzomatic
Great add-on to add to your garage.
Check the price on Amazon.

Most of the kits are lit up using this method:

You should only use a flint striker to light it because smaller lighting devices are too small. They will put you at risk of burning your hands as you light it up. Specifically, avoid matches and normal lighters. You must make sure that the tip is facing away from you. Watch out for other people and flammable objects.

But if it has its ignition device, skip the above steps and follow the instructions given.

How to Shut It Down When You Are Done

Because there is also no knob or button present to stop the flame, you must manually shut it down. Do it by cutting off the gas being supplied. There is a seemingly never-ending debate about which gas supply to switch off first. Is it oxygen followed by acetylene or acetylene, then oxygen?

While both methods are correct, manufacturers generally advocate shutting off the oxygen valve first before acetylene. This method allows the acetylene still flowing to blow off the soot that settles in the crevices of your torch. Any soot present can affect the seal of the gas valves and cause a leak.

Not only that, but this order also allows you to conduct a leak test before turning off the gas supply. Once the oxygen supply is off, then turn off the other. The presence of a small flame will indicate a leak if no gas is flowing. Early leak detection helps prevent an explosion.

If you are done with your work and need to return your equipment to its storage, you must follow the following steps:

When storing the tanks, make sure to keep them in a dry and airy location far away from any flammable objects. Always keep them in a vertical position.

Can You Cut Cast Iron With a Torch?

Have you ever attempted to cut cast iron using an ordinary blowtorch? If so, you may have realized that it is a futile effort. But if you are using a cutting torch to do so, the result will be different.

An oxy-acetylene torch has the highest flame temperature present. It can easily cut through even steel at least 200 mm thick. But when it comes to cast iron, it is also possible. It will not give you a clean result and is a bit harder to do.

Preheating the cast iron is crucial before you get started. This is done by setting the torch to produce a carburizing flame instead of a neutral flame with the highest possible temperature. This type of flame offers better preheating to the cast iron and stops oxides from rapidly forming. Preheating should be done from top to bottom and with more acetylene so that the heat will deeply penetrate the cast iron.

Once it is sufficiently preheated, make small semicircles around the preheated line to melt the iron. Finally, use the oxygen jet to blow off the molten iron and cut through it. You may need flux to help you get the work done.

Because of the complicated process, using this specific device to cut its way through cast iron is not the most common method. There are other methods specially developed for this purpose.

Can I Weld With It?

Are you wondering if you need to buy separate welding equipment if you already have a torch and need to do some welding? If so, we have good news. You can also use it for your welding needs. This process is known as oxy-acetylene welding.

The metals are placed side by side, with a small gap between them. They are melted together by the flame created by the gases. When they cool down, the melted sections are already bonded to form a weld seam. This type of welding can be considered if joining metals fast is your only concern. The welding joint formed is not as neat as the ones created by other welding methods.

A neutral flame is also used for welding, but you need to move your torch circularly. That way, the metals will melt and pool towards the small gap present between them. The weld seam formed using this method is strong enough. You can also add filler material using a rod to increase its strength.

Contrary to its name, a cutting torch is not only used for cutting. You can also use it in different ways, making it a versatile tool you must have in your workshop.

When you have to cut or shape different materials or things, bring out your acetylene cylinders. Check the cylinder pressure to make sure you’ll have enough gas for the job and the area you have to work on. Dirt can accumulate in the valve outlet, so make sure to clean it out. There will be sparks as you work! Remember that grease should not be used near oxygen equipment and clothing should be loose.

Do you turn on the oxygen or acetylene first on an oxy-acetylene cutting torch?

Starting up the oxy torch is easy once you’ve done all the regular safety checks. You’ll have to set up a torch. You will have to purge both torch valves separately, and you can start by turning on the fuel gas valve by 1/2 turn first. Ignite the flame and adjust it till it becomes normal. Once this is done, turn up the oxygen valve and bring it to a neutral flame.

How do you set the flame on a cutting torch?

You can start by turning on the acetylene valve by 1/8th of a turn and igniting the flame.

Now slow down the flame until the smoke is reduced to a minimum. You see the flame turning into a feather-like shape towards the end. Now turn on the oxygen valve slowly and watch the preheat flames appear. Adjust this until the neutral flame appears.

The neutral flame will be conical and sharp unless there is a low oxygen level. Both oxygen and acetylene need to be at adequate levels. Otherwise, the progress of the cut will be hampered.

What pressure should oxygen and acetylene be set at?

It’s safe to assume that an oxygen pressure of 40psi and acetylene pressure of 10psi are good to go. However, always check the machine’s manual. Adjust the flame until you see the neutral flame appear for a safe bet, and you’re all set to start.