Catalytic converters are important parts of a car, and you don’t want it not working. In fact, it’s one of the more expensive parts that can need replacing.

Here’s what we’ll be covering in this article:

What does a catalytic converter do?

Even the luckiest car owners are not immune to clogged catalytic converters. No stress is needed if you are new to the world of automobile service and know nothing about this part of your vehicle. A catalytic converter is a special device that:

You’ll find it between the muffler and the engine.

Usually, a car engine produces nitrogen oxide (NO) and carbon monoxide (CO) that sufficiently pollute the air. For that reason, most automobile companies equip gasoline and diesel engines with these types of filters so that the cars become more environmentally friendly.

The neutralization process of exhaust gases is not a complicated one. A catalytic converter is just a box between the engine and your car’s tailpipe. The catalyst inside adds oxygen to toxic carbon monoxide and removes it from nitrogen oxide. As a result, exhaust fumes are much safer for the environment. The material of the catalytic converter is also important in the filtration process.

The equipment of that kind is usually made from platinum and rhodium—expensive metals that often get stolen. The other unfortunate thing common for this component is that they sometimes get clogged.

Every catalytic converter will eventually go bad. Over time, the carbon deposits congest the inside of the cat and force it to work inadequately. Another reason for faulty cat functioning is unburned fuel. When excessive fuel reaches the catalytic converter, it ignites and elevates the temperature to the extremes. High temperatures will eventually cause an inner meltdown. It also means worse fuel efficiency.

Sometimes your vehicle can have issues affecting its functioning. The engine will get a harmful fuel mixture if the oxygen sensor works poorly. As a consequence, it will increase the temperature inside the emission system. If you are a fan of short distances, you should consider taking your car for a long ride once in a while. Do not use your vehicle for a brief period. In that way, it does not heat up enough for good functioning.

If you already suspect that the catalytic converter is clogged, consider the common signs of that issue. Otherwise, they may not last the lifetime of the car.

Signs of a clogged catalytic converter

When your car stops working effectively, it is the first sign that something is wrong with it. Detecting the reason is the more complicated task you will face afterward. If you are facing problems with acceleration, misfires, or poor fuel economy, that means your catalytic converter needs to be examined.

Other than low engine efficiency, you may spot:

This type of weird activity your car might be doing is a clear sign of a clogged catalytic converter.

What happens when the catalytic converter goes bad?

With catalytic converters, it is often the case that they go bad. The older your car gets, the more chances you have of facing that problem. It is similar to a certain part of a pipe in your household. If something gets stuck there, the water supply is disrupted. The same thing happens when the component is clogged. It fails to discharge noxious gases from the engine and shatters its proper functioning.

A defect in one area of your vehicle is like a cancerous tumor that will spread later on without proper diagnosis and treatment. This worst-case scenario may happen if you don’t notice signs of a clogged catalytic converter in time. To ensure the safety of your car, the list of ten symptoms will come in handy. This way, you can look out for them.

How do you know if your catalytic converter is going bad?

Performance issues could also be caused by other parts of the emissions system, so make sure to check those.

A catalytic converter should not produce unnatural noises for vehicles. You will hear a rattling, ticking, or knocking sound when it is damaged.

The rattling sound is the one that a cat converter makes when the honeycomb is lost because of age or mechanical damage. It is easy to hear a rattling noise when the cat has not reached a high temperature. When it is heated, it loses sonority. Unfortunately, a damaged honeycomb means that the part is beyond repair and needs to be changed.

Often, a rattling sound comes from an unsteady heat shield. That happens when bolts are too old to keep the heat shield fastened or when they get loose on their own. To remedy the situation, you need to tighten it back up.

The reason why you hear a ticking or knocking sound beneath your vehicle can be a leak or exhaust fume. Those noises get louder when you accelerate your car. If you spot an exhaust leak, it’s best to leave it to the mechanics to weld.

Can a bad catalytic converter cause a p0300 code?

It certainly can. The p0300 code designates random misfires within the cylinder. This code usually appears when the car faces complications with the ignition or has an inner engine malfunction. One of the causes of the p0300 code is a faulty catalytic converter. The symptoms of this code are very similar to those listed for a clogged cat converter, but the code generally points out engine problems. That is why it is easy to get confused about why the p0300 code appeared. You should always remember that a bad catalytic converter is often the cause of the whole system contamination.

When your car shows a p0300 code, this is the right time to consider more profound repairs. The damage is more serious if your vehicle has all the symptoms of a clogged catalytic converter and a p0300 code. It is not only unsafe to drive on the road with such a problem; it also increases the likelihood of a collision.

Can a clogged catalytic converter cause a misfire?

The vehicle’s computer often discovers the problems within the engine system when a misfire happens and throws the diagnostic trouble code. That means it is time to check the part when you see the check engine light turned on.

Here are some reasons for a clog:

Unclogging a catalytic converter is certainly easier than the diagnostic part. Once you are sure it is clogged, you should find out how bad it is. If the damage is minor, you can try to repair it yourself.

Running your car too slowly is what sometimes causes minor cat clogging. Emission vehicle systems and an engine need a certain temperature for efficient functioning. The best temperature for a catalytic converter is in the range of 800 °F to 1832 °F. You can try to drive your car faster than you usually do so that the heat will burn off all undesirable sediments in the system.

The second method includes using a cleaner. Ensure your car has 15 liters of fuel before pouring the cleaner into the fuel tank. The next thing you should do is to drive a car for about 30 minutes at no less than 2500 rpm till the fuel runs out. Pay attention to the temperature of an engine so it won’t rise too high.

This method will be successful when you no longer have any problems with acceleration. Fewer fumes from an exhaust pipe are also a good sign. It is an efficient way to clean minor clogs.

Here’s the product we recommend for the purpose. 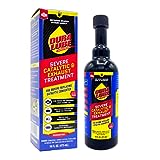 For a more considerable blockade, try the following procedure.

The other method is the more complicated one, which involves removing the catalytic converter. To avoid injury, make sure the exhaust system is cool. Then put your car on jack stands and get rid of the oxygen sensors.

After removing the catalytic converter, check it for a rattling noise. If you hear any sounds inside, stop the unclogging procedure and replace it with a new one. The following steps are to wash it with a pressure washer and plunge it in hot water with a degreaser. Finally, let it dry and reinstall it afterward.

Those methods are useful when the damage is not significant. If yours has serious mechanical damage, manual cleaning won’t work. In that case, the only solution is to buy a new one. Considering that they are made of expensive metals, it would impoverish your purse for no less than $1000. Make sure to look out for clogs to and get the car’s best mileage.

Be sure to be on the lookout for a decrease in power, so replacement of these palladium-filled parts won’t be necessary. You’ll even be able to pass the emissions test without problems upon inspection.