There are two different numbers on a bottle containing an alcoholic drink. The first one will show an ABV percentage representing alcohol by volume. It is easy to understand as it simply refers to the percentage of alcohol in the entire liquid. Because it is so easy to use and understand, it is also an international standard.

The other number indicates the proof, which is a measurement that varies from country to country. It first appeared in 16th century England where such drinks were taxed higher by the government. In the United States, this standard is easy to understand because it makes a drink with 50% alcohol to be exactly 100 proof.

Let’s dive deeper into this subject and learn more about this standard. Below, you will find 7 interesting facts about “proof alcohol.”

What is proof in alcohol?

Proof in alcohol is a unit of measurement that will help you determine the content of alcohol in a beverage. If the concentration is high, the drink is also strong. For tax purposes, it was decided by the government that any liquor bottle that has 50% alcohol will be considered 100 proof.

It is a standard used to determine the tax on alcoholic drinks. A bottle of vodka with 40% alcohol can be considered 80 proof, and so on. Some strong drinks with 96% alcohol can reach 192 proof, while soft ones will go as low as 80 proof.

But this standard varies worldwide, so it is not a universal international measurement system. For example, a French liquor with 60% alcohol would be considered 60 proof by the French government.

There are 2 methods for finding out the alcohol content of a beverage: proof and alcohol by volume. The proof of an alcoholic beverage in the US will always be double the ABV. That is why a whisky with 50% alcohol is also called ”100-proof whisky”.

Alcohol by volume is commonly abbreviated as ABV, and it measures the ethanol content in an alcoholic beverage. The result is expressed as a volume percentage, and this is a standard that is used worldwide.

On the other hand, proof is a measurement system developed by the British Royal Navy in the 18th century when seamen received a daily ration of rum. Because rum contained 57% alcohol, the volume was graded as 100 proof.

What is the highest proof of alcohol?

Most of the time, proof is used mainly in liquors that are at least 40 proof. The lowest-proof drinks can go as low as 66 and even 42 proof. However, to be considered a straight liquor, the beverage has to feature at least 80 proof.

On the other hand, a highly concentrated beverage can reach up to 192 proof in the United States. The strongest one you will find on the shelf is Spirytus, a Polish vodka with 96% alcohol or 192 proof.

Compared to Everclear which has 95% alcohol, Spirytus has a higher alcohol percentage. Pure alcohol is also known as ethanol and is very volatile. It dissipates more easily than water. When it is exposed to air, it will draw out any moisture from the atmosphere.

Therefore, it is impossible to drink 200-proof alcohol. As you pour it into the glass, it will no longer have the same concentration by the time you bring the glass to your lips. You might find 200-proof alcohol in some stores, but it isn’t sold for personal consumption.

How to proof test alcohol

There are many methods to test alcohol, but using a hydrometer is the most effective. The hydrometer is an instrument that will measure the percentage of alcohol in a beverage. It measures the density of your drink while comparing it to the standard density of water.

There are two types of hydrometers used by experts in breweries. These are the brewing hydrometer and proofing hydrometer. Their main difference is the scale they use.

The brewing hydrometer can only measure up to 20% alcohol, while the proofing one is much more advantaged. It can measure up to 200 proofs or 100% ABV. To measure your drink, you must float the hydrometer above it and check the reading on its side.

Check the product below if you are wondering where to find a good hydrometer. After researching the market for hours, it is the best one we could find.

This high-quality product is fully American-made, so you can rest assured that you will get an original product manufactured within the country. It meets and also exceeds the standards imposed by the National Institute of Standards and Technology. You can measure concentrations from 0 to 200, with readings visible on the scale.

Whether you want to measure moonshine, corn whiskey, or high-alcohol liquor, this tool is the best to get the job done. Inside the package, you can find the hydrometer alongside a solid borosilicate glass test tube when the order gets delivered to you.

A stainless steel bottle brush is also included, designed for use in a very narrow test jar. A microfiber cloth and operation instructions are also provided to know how to measure your beverage properly easily. 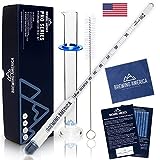 2,256 Reviews
Hydrometer
It's a simple hydrometer.
Check the price on Amazon.

When looking for a beverage within these values, you will find the 100-proof whiskey to be the most popular one. It means that the whiskey has 50 percent ABV, which means the drink is 100 proof.

It is quite a strong drink, and you will get drunk quickly. Let’s look at the most popular 100-proof whiskeys you can try.

Bartenders widely use the Old Forester because it pleases everyone with a friendly flavor. It goes well with other ingredients that it’s mixed with. A specific oak undertone makes it unique but can give you a harsh alcoholic burn due to its high concentration. Many people regularly drink this bourbon, which is also used for special events and private gatherings.

This whiskey features the specific sweetness of vanilla combined with brown sugar enhanced with orange peel. For an earthy flavor, cinnamon has been added to make this drink something truly unique. Most consumers said it feels like an expensive drink, which you can buy for less than $50.

Equal to 40% ABV, 80 proof is the most common measurement for spirits. You will find various rums, gins, and tequilas in this category as US laws require them to be 80 proof. But there are also some economic benefits because 80-proof drinks are cheaper to bottle and require less tax. The higher the proof, the more expensive the tax will be.

Jameson has been leading the Irish whiskey market for a long time, making it a popular brand worldwide. You can find the standard Jameson Irish Whiskey in stores as it is widely available. This beverage has a 40% ABV which is exactly 80 proof.

Another good example with 40% ABV or 80 proof is Appleton Estates Extra, a high-quality rum. It offers a layer of complexity in its delivery that many worldwide appreciate. Smooth but spicy, this rum can offer a nice kick and leave a lot of flavor behind for you to savor.

Everclear is a beverage distilled from mixed grains. It has quite a big reputation and is known to have a concentration of 95% alcohol or 190 proof. It is a highly versatile drink, and the company constantly orders new clients.

Drinking Everclear on its own is not recommended because it is very strong. Although not completely without flavor, there are fading notes of orange peel and white pepper. This product is often used for making other drinks, especially liquors and bitters.

35% ABV or 70-proof alcohol is commonly found in flavored spirits and some liquors with a higher concentration. But 70 proof is on the lower end of the scale since this measurement is only used for hard alcohol. Spirits are supposed to be higher than beer or wine, usually below 15% ABV.

It’s the company that produces this whiskey used to make it with a neutral grain spirit for decades. Nowadays, they are restoring whiskey as the base spirit. This beverage works well in various cocktails. However, some people might find it too fruity for their taste.

This rum is 35% ABV or 70 proof. It is a creamy and very soft drink with enough freshness and an overpowering flavor of vanilla and sweet spices. It is also an excellent choice for bartenders who want to try new cocktail recipes.

Made in Grenada, this rum is obtained with a tradition named ”pot stilling”, which is centuries-old. It is a method of slow-distilling used to get the maximum flavor. Sugarcane juice is fermented using a waterwheel. Eventually, this 180-proof rum is created.

Made in the Czech Republic, this beverage has 89.9% ABV. Because it is 0.1% less than 90% ABV, it is considered to be 179 proof. However, the difference is almost non-existent. It is a strong blend often used by bartenders who mix it with other drinks.

With a 75% alcohol concentration, the Sierra Tequila Silver is considered the strongest tequila available for sale at 150 proof. It is a well-matured and clear drink full of character and exquisite flavor. Most bartenders use this beverage to create specific cocktails and mixes of drinks.

While we presented the strongest tequila above, here you have the strongest gin. The Strane London Dry Gin is bottled in small quantities at a distillery in Sweden, where their gins are created using 3 differently balanced bases.

While the 190-proof alcohol is their strongest drink, Everclear also offers a 120-proof option. It can easily be compared to moonshine as they share similar features. Some people like to use it as a base for their cocktails and add extra flavors.

This one-of-a-kind single malt scotch and its name resemble ”the original” in Gaelic. It is aged in sherry casks, giving it a specific fruit flavor complemented by spice.

What alcohol proof is moonshine?

Most of the time, you will find moonshine to have an ABV of 40%, which is 80 proof. In some cases, it can reach as high as 80% ABV or 160 proof. Unskilled brewers often make moonshine. It can vary a lot in its alcohol content.

Sometimes it can even come out at an unsafe level, which makes it a dangerous beverage to drink. Its freezing point is affected by the alcohol content, and you can use a hydrometer to determine the ABV of your spirit.

The freezing point of alcohol by proof

At what proof does alcohol burn?

Alcohol will burn if its content is high enough because this substance is highly flammable. Anything above 80 proof can light on fire. The higher the concentration, the easier the alcohol will ignite. Most 80-proof beverages include tequilas, whiskeys, and vodkas.

How can you test the proof of alcohol without a hydrometer?

While hydrometers are the best tools for measuring alcohol, you should know that some other alternatives will give you the same results. Refractometers are also ideal for this task. They are cylindrical instruments used to measure sugar concentrations.

While there are many analog options, digital refractometers are the best as they also have a built-in light. An analog piece will require you to look at external light sources.

Why is alcohol measured in proof?

Alcohol is measured in proof because the government would increase the tax on liquor that had a higher amount of alcohol back in the 1500s, specifically in England.

The ethanol percentage was determined from a crude test. The government would soak a pellet with alcohol and try to set it on fire with gunpowder.

Does Everclear give you a hangover?

After a long night of drinking, you should expect a mild hangover in the morning, especially if you drank Everclear. The distilling process will cut down on a chemical in alcohol called congeners, which are linked to hangovers.