It can be one thing to buy a vehicle and another to maintain it. A check engine light is worrying, let alone a P0171 code that you don’t understand. Here we cover all the basics of fixing the P0171 engine code of a Chevy, Ford, Toyota, or Nissan, whichever vehicle you may have.

The P0171 code is triggered by the vehicle’s Power train control module, also known as PCM. The PCM is like the CPU of the car. It is the computerized control unit that is in charge of the transmission as well as the engine. Several sensors in and around the car are attached to it, like nerve endings in a brain.

The P0171 code is triggered due to the air and fuel ratio. When the oxygen level is too much, or the fuel is too low, the system is too lean. Thus the code triggers the PCM.

It could be that there is a vacuum leak causing this to happen or several other issues that are listed below.

Have you experienced any of the following symptoms?

It is to be taken seriously, certainly. No doubt driving around without fixing the P0171 code can result in power issues and engine performance problems. It eventually leads to damage to parts like the catalytic converter, which is in charge of converting the harmful gases into broken harmless compounds for release.

If the air-to-fuel ratio is high, you look at poor performance during acceleration or incline. You should certainly treat it as soon as possible.

Symptoms to look out for

Before you land up in such a mess that you don’t know where to start fixing, it’s a good idea to check for these symptoms.

The check engine light is one of the first indicators of something gone wrong. Although it will puzzle you about which component to check, combined with other symptoms listed below, it will be pretty obvious as the P0171 code.

It could be a major sign if you’re experiencing a sudden loss of power when you try to speed up or drive uphill. When you press down on the gas, and there’s less fuel and more air in the engine, this results in no effect and instead a slowing down of the vehicle.

You’re at a stop light or in the driveway, and the vehicle is shaking badly. It is a sign something is up with the engine. Take a look at the PCM and check for the codes.

If your engine is sputtering and spitting noticeably, open it up for a good look. A misfire can sound like a bullet going off and it’s not a sound one can miss.

If you’re familiar with gas leaks, you can detect a hissing sound near the vacuum where it might be leaking and causing too much air.

Here are some of the reasons this could be happening:

Just as it sounds, the job of a fuel pump is to deliver gas to the engine. The air-fuel ratio is distorted with too much air when it cannot do this. The fuel pump may need repairing or replacing if it is getting weak and causing the system to run lean.

If the mass air flow sensor is dirty or faulty, you will certainly get a reading of the P0171. The sensor’s job is to detect the airflow. If it’s too much, it will cause a lean system. But it may not be the case each time. Perhaps the sensor is faulty or dirty and not detecting the correct airflow. In this case, you may need to replace it.

Usually, the air intake occurs through the throttle body of the car. When there is a vacuum leak, this intake is increased and disrupts the fuel mixture and thus the combustion process.

Issues with the control system or the PCM can also cause a faulty reading. The PCM should be checked and repaired, so the check engine light doesn’t stay on for no reason.

There are plenty of signs that indicate a clogged injector. Not only does the air-fuel mixture get distorted but also the mileage starts to fall by a significant factor. It can also cause the RPM needle to wave about even when you’re not changing gears. Rough idling and misfires are also common signs to watch out for.

The converter’s job is to break down the harmful compounds into harmless ones for release into the air through the exhaust pipe. When this gets clogged, it’s even more likely that polluted air will stay inside and sway the fuel mixture.

The role of a fuel filter is to allow the fuel to get filtered for any debris, dirt, or foreign particles that can potentially disrupt the working of the injector. When this gets clogged or stops working, there will be issues with the overall fuel quality of the engine.

It’s the sensors that trigger the PCM for the codes. If the sensors are faulty, they are going to display wrong readings and thus cause the driver to believe that the engine has problems. In this case, the sensors will need repair or replacement to deliver the correct reading of the level of oxygen intake.

If you’re driving a Chevy Silverado, or a Chevy Cruze, having a P0171 code might bother you at some point. What it means to have this is that your system is running lean or there is a vacuum leak. Both scenarios have the same possibility of insufficient fuel reaching the pump. The air-to-gas ratio is much too high, and thus the car must also be powering less.

If your car is a Toyota Corolla or any Toyota, a P0171 means something slightly different. It indicates that the MAF or mass airflow sensor is faulty or detecting too much air in the tank. There could also be a vacuum leak in the valve of the MAF sensor. It could also be a sign that an oxygen sensor has gone faulty.

In a Ford, like a Ford F150 or Ford Ranger, the code indicates the first bank of the engine is weak. The weak engine is causing too much oxygen or too little fuel in the mix. There could also be a potential vacuum leak in the valve. The fuel pump could be weak, or the MAF sensor could be dirty. It causes the code to occur.

How easy is it to diagnose?

It can be relatively moderate to easy for someone with experience to diagnose the problem. A mechanic can simply use a vacuum gauge to detect the leak in the engine. A hissing sound will already be present in this case. Other diagnosis methods include checking the:

It is easy to diagnose as long as it is done on time. If it is not repaired on time, the car will start to lose power and idle with vibrations.

There are simpler ways to diagnose this code without having to call a mechanic and spend extra bucks. Here are some products to help you out.

Determine the cause of your engine light with this diagnostic tool. It can read and erase codes as well freeze frames. You can get engine speed, coolant temperature, calculated load value, and more. There is also no need for a charger or battery. The tool gets the current directly from your vehicle through the OBDII data link connector. The scanner is very much portable and has a 2.5 feet long cable. 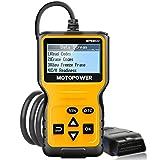 19,739 Reviews
Code reader
Get this code reader.
Check the price on Amazon.

A trusted tool by more than 35000 customers, this scanner has it all. Recommended by popular YouTuber and mechanic Scotty Kilmer, it boasts exceptionally accurate and speedy results. The large screen and long cable are an asset, making it the professional’s first choice. Unlike other scanners, this is universal and compatible with OBDII protocols. The speed and accuracy are unmatched and thus rated 4.6 stars.

It is a 5-year warranty tool that boasts of the airbag, ABS/SRS/Transmission diagnostic all in one. Apart from reading and erasing codes and viewing freeze frames, it has an:

It even has live data graphing, a huge graphic screen, and a printing function for the best of experiences. It’s the perfect gift for any car owner so they can always stay on top of their vehicle’s needs. 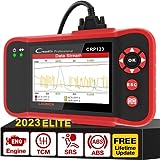 2,824 Reviews
LAUNCH OBD2 Scanner
It's a step up.
Check the price on Amazon.

It is highly unlikely. Unless there is a fault in the PMC, there are slim chances that the code will clear itself until some steps are taken. Some parts must be cleaned, repaired, or even repaired before the code clears itself. Even manually, you will need a scan tool to view and clear the code.

You will probably need to check and replace the fuel filter, fuel pump, or fuel injector to get the code to go away. The catalytic converter must also be checked.

There are a couple of steps to follow to diagnose and fix both codes:

If both codes are showing at the same time, figure out which components are affected uniformly in both cylinders or banks. These components include the:

Use a scan tool

Using a diagnostic tool to find the source of the problem is certainly very handy. It can point to the oxygen, MAF sensors, or any other part that is the origin of the code.

Sometimes the issue is particular to the vehicle itself. The Buick Encore and Honda CRV or Lexus will have their manuals and causes for a code. Check the manual and try to find the source of the issue.

Check the MAF and throttle body.

The MAF sensor is a very common problem. If your Nissan Altima, Honda Accord, or Subaru is flailing in engine power or idling roughly, you should check out the MAF sensor first. If you’re finding the fuel being used up quickly, clean the MAF sensor and consider replacing it if it still doesn’t work.

Each component has a different price and thus can be a huge range of costs for the fix.

Here are some answers to more queries about the code.

Certainly not. You cannot drive. Eventually, you will face a major problem that will cause you to stop and get help. Thus it is super important to fix it right there and then before the problem gets out of hand.

It can certainly cause a P0171 code. The air filter must be cleaned or replaced to remove the code. The clogged particles distort the proper air-to-fuel ratio. Keep a clean filter whether you have a Nissan Maxima, Nissan Frontier, or Dodge Charger.

In some cars, like a Ford Expedition or BMW, the PCV valve can cause the code to be triggered. In a dodge charger, this will mean a lean system