Heart disease has some really unfortunate statistics when it comes to deaths in the US. It’s the leading cause of death in the country.

What’s less known is that chronic lower respiratory disease is also high on the list. It’s in the third spot.

Among the chronic lower respiratory diseases that kill many Americans is COPD. It stands for chronic obstructive pulmonary disease.

Here’s something that not everyone realizes.

Heart disease and COPD may look very similar to the untrained eye.

Shortness of breath is something you’ll experience whether you have one condition or the next. It’s a hallmark sign that shows something might be wrong.

Let’s take a closer look at the individual components so you can hopefully help stay in better health.

Did you know that COPD is a chronic inflammatory lung disease? The inflammation causes issues as the airways are obstructed, and the airflow has a harder time getting from the long.

Breathing difficulties, coughing, wheezing, and mucus stems from your being affected by this disease.

What’s unfortunate about COPD is that it worsens over time, with breathing increasingly difficult. It happens as less air flows in and out, affecting 15 million American adults. Yes, it’s no party living with the condition.

Lots can be done to avoid getting it, which we’ll get into later.

The former is caused when there’s damage to the walls between air sacs in the lungs. These sacs fill up with air as oxygen is breathed in and are stretchy without the condition. Deflation happens as the air leaves the sacks. Emphysema makes it harder for air to leave.

Repeated inflammation is what causes Chronic bronchitis, more specifically in the lining of the airways. You probably know how mucus can be annoying with the common cold. With bronchitis, more mucus makes breathing difficult.

COPD is often caused b a mixture of the two diseases. The severity of each will vary.

What causes COPD & what are the risk factors?

One of the biggest things causing COPD is smoking. However, it’s not the only thing that’s causing it. 30% of people that get the condition never smoked.

Another thing causing it is alpha-1 antitrypsin (AAT) deficiency.

Excessive mucus is a consequence of COPD, created when coughing happens. Shortness of breath, difficulty breathing, and chest tightness are other symptoms. Routine activities become a chore as the condition worsens. By the time it progresses, taking care of yourself becomes tedious. Activities like walking or cooking will take your breath away.

Oxygen levels are diminished, and life gets far harder as it progresses.

Shortness of Breath from Heart Failure

Congestive heart failure causes the heart to weaken. It means blood is no longer pumped around the body as it should. Backing up fluid levels causes issues for the heart and lungs. The consequence of that – is shortness of breath.

Small amounts of exercise or activity cause exertion, making it hard to function.

Shortness of Breath from COPD

The symptoms may largely look the same regarding congestive heart failure and COPD. Heart failure comes in two shapes, though. One’s left-sided, and the other one is right-sided. Heart failure can either be related to or worsened by COPD.

COPD can cause right-sided heart failure in extreme cases. A rise in blood pressure in the lungs’ arteries happens as the body struggles with low oxygen levels. The condition is called pulmonary hypertension.

Additional strain is put on the ventricle, which is responsible for pushing blood through the lungs. Heart failure can occur as the muscle becomes weaker over time.

COPD and left-sided heart failure are not directly caused by one another. An exacerbation can happen if a patient suffers from both. Additional stress is placed on the heart due to lower oxygen levels. Worsening symptoms can be expected as a consequence.

Fluid buildup happens in the lung, which makes the COPD worse.

The connection between heart failure and COPD is important to keep in mind. The risk of heart failure is increased in people with COPD, and continuing to smoke will only worsen the symptoms. Smokers are at risk of COPD and heart failure due to their lifestyles.

Seeking the medical guidance of a cardiologist can monitor your health, especially if you’re looking to make a change.

It can be hard to tell whether your shortness of breath is caused by one or the other.

The difference between the two is often investigated through a physical examination. It includes:

Fluid buildup in your lungs can be seen using a chest x-ray. It’s a sign of heart failure. On the other hand, COPD does not flood the lungs with additional fluids. However, over-inflation is a sign of COPD.

Cardiac enzymes are examined in a blood test. These can help see if it’s a heart condition. Issues there will put additional strain on the heart.

An echocardiogram is an ultrasound test to evaluate your various organs. Looking at the valves, pumping strength, and heart, it’s determined whether it’s a heart issue.

It’s important to make sure you start changing your habits when COPD is discovered. The biggest improvement you can make includes:

It also helps if you start becoming more active to help slow down the progression.

Pulmonary rehabilitation, oxygen therapy, and medicines are other options that can help you deal with the situation you’re in.

To increase your oxygen levels, oxygen therapy is used. Oxygen is delivered in myriad ways, including a face mask or tube placed in your trachea.

It can be delivered both at the hospital and at home. However, it’s important to know that oxygen deficiency causes certain issues. However, introducing additional oxygen increases the fire risk.

For that reason, flammable materials need to be kept far away from oxygen sources.

It’s common to experience a range of side effects with this treatment. They include:

Here’s a good oximeter that can measure oxygen levels. 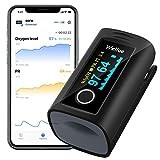 7,269 Reviews
Wellue Bluetooth Pulse Oximeter
It's one of the best on the market.
Check the price on Amazon.

It’s administered through an inhaler, ensuring it can easily reach your lungs. While some inhalers are slightly different, they typically work largely the same way. It’s important that you follow your doctor’s recommendation if you’re put on such medicine.

The medicine that’s prescribed will depend on the severity of the condition. Long-acting bronchodilators are administered in more severe cases. When flaring up happens, the steroid can be given in addition.

Steroids can reduce inflammation, whereby airways are partially cleared up. A doctor will often work with you over an extended period to figure out what solution works in your given situation.

Pulmonary rehabilitation is a broader approach that seeks to tackle unhealthy aspects of your life. It includes:

Breathing techniques are taught to best cope with your condition.

Some people with COPD benefit from surgery. However, it’s not a desirable approach if other treatments prove effective. It’s usually done to people experiencing severe symptoms.

A lung transplant is a big, invasive measure. It includes replacing the diseased lung. Severe or chronic lung cases can improve their quality of life through this procedure. It can also be done when other options have been tried without success.

Recovery is extensive, and you can expect to spend 1 to 3 weeks at the hospital following the surgery. Special medication is administered to ensure your body does not reject the new organ. Additional changes are important to ensure the safekeeping of your body following such an invasive measure.

Patients with COPD will go through episodes of exacerbation where symptoms worsen. Morbidity and mortality increase, and the quality of life decreases. Additional inflammation caused worsened breathing. Flare-ups cause respiratory symptoms to become more severe.

Viruses and bacteria can cause these exacerbations, infecting the airway. Faster disease progression is often seen in patients prone to flare-ups. Stronger medication is often given to help keep flare-ups at bay.

However, patients are encouraged to take additional measures to avoid excessive inflammation.

Unfortunately, there is no cure for COPD, only treatment. Patients are encouraged to work with doctors and consider lifestyle choices to ensure the best possible quality of life.

Lungs with COPD will often look hyperinflated on an x-ray. A flatter diaphragm is common, and the lungs will appear larger than normal, as will the heart.

Milder cases of COPD can live into their 90s. Other health problems can shorten your life, and pneumonia and respiratory failure are definite options.

Patients with COPD will experience their breath clicking or crackling as they breathe in. The sounds can make either sound particularly coarse or fine.

Healthy individuals will have oxygen levels ranging from 95% to 100%. However, oxygen saturation in COPD is generally around 88% to 92%. An oximeter can tell you where your readings are at.

The tendency for COPD to be hereditary is very low, with only 1 in 100% being predisposed with alpha-1-antitrypsin deficiency. The most common reason for the condition involves smoking.

How do you get COPD?

Tobacco smoke is the most common cause. However, Respiratory infections and increased air pollution can contribute to the likelihood.

Can COPD be reversed?

Curing or reversing it is not possible.

Can you die from COPD?

Can a person with COPD get better?

Treatment can be provided to keep the symptoms at bay. Additionally, a patient can make lifestyle choices to improve their COPD.

Is COPD a disability?

Yes, it is considered a disability.

Is COPD a death sentence?

It is not a death sentence. Many people live past the overall life expectancy with the condition. However, it can significantly decrease the quality of life for those affected.